PROPERTYOFZACK'S INTERVIEW WITH THE NARRATIVE

- June 16, 2012
The PropertyOfZack site did an amazing interview with The Narrative and you can check it bellow:
(Original post bellow) 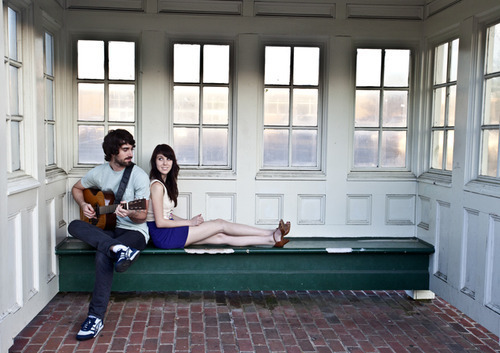 The Narrative have been working hard on a new album for a few months now, and PropertyOfZack had the chance to catch up with the band a few weeks ago for a great interview. Jesse, Suzie, and I discussed where the band is in their recording process, the writing for the new record, when they’re hoping to finish up, signing to a label, and a lot more. Read it all below!

For the record, could you guys state your names and roles in The Narrative?
Jessie: I’m Jessie, and I play guitar and sing.
Suzie: I’m Suzie, and I play piano and sing.

The band announced that it was beginning to record its new album in late-March. Is that process done now?
Suzie: We started in March and worked through April. Now we’re in the harmony stage where we’re going through all the songs and adding in more vocals and backgrounds on parts. After that, we’ll do more production stuff and hopefully do another recording with additional players like string players or horn players. We still have a little bit of a ways to go.

It looks like you guys are recording in a barn in Upstate New York. Is that right?
Jesse: We started up there and were there for a month. We rented the barn out for a month and got down the basic instruments and lead vocals and all that stuff. Since then we’ve been at a studio in Brooklyn finishing up the rest of the songs. We’ve been working with a friend of ours as well to help arrange the less rock-band instruments like strings and horns. We’re all over the place.

Was it a nice experience to do it away in a barn and all that?
Jesse: I think it was great because we made our last record cooped up in a window-less garage. We set out to do this entire thing differently. We did that record 16 hours a day at by the end of the process everybody was pretty exhausted and annoyed. You don’t want to feel that way when you’re making music.

The band has been pretty quiet since last year’s Warped Tour. Was there a reason that The Narrative were so dialed down this year?
Suzie: We came off Warped Tour and started getting back into our lives a little bit and we started to put together the core ideas for our new album. We pushed our attention there. We did some traveling and personal stuff, but we got into writing songs. We didn’t have a lot of tours that were really good for our genre. We just focussed on writing since nothing was making sense tour wise. That’s what happened. We played CMJ in the fall and played some new songs there. We did Kickstarter tracks too for new music. We definitely switched to writing phase instead of shows. I think we’ve been there for a while and are eager to get back again.

How was the writing process for this record?
Suzie: We went back to writing as a duo. This record was really about the core instruments like guitar, piano, and voice. That was the center of it all. I think we feel really good about that. I’d say that we had a lot of material. We wanted to put our options on the table and to choose what we felt was the strongest. It was a lot more of a selection process this time.
Jesse: We had what we had on the last record. I think in the last one, we wrote a group of songs that we were happy with and then recorded. This time we wrote until we had a ton of songs that we were happy with and some of those you grow out of and some of them you’re happy with. We wanted to have a selection to pick for the record.

We’re quickly approaching the two year mark of the last record. Are you happy with the response to that record and what you were able to do on your own with it?
Jesse: I think that we’re constantly amazed to the response we get from those who have heard us and get attached to our music. Some people say really powerful things about our music, and that’s awesome. In order to continue to do this we need to reach a wider audience. There is financial income, that at the very least, can give you the stability to tour and make music. That’s something, at this point, that we’re looking to explore. To at least have a label that can back us financially or help us reach a wider audience.

Will we see The Narrative more busy in 2012 and 2013 with this record?
Suzie: Once we get everything together, hopefully we can assemble a good team. We’re good at keeping ourselves busy. That’ll happen with or without a team. We can certainly use help in making us even busier. We’re hoping to do a show in Manhattan in July. We’re not totally sure, but we’re hoping for it. I’m not sure about the summer, but we’ll take any opportunities we can. The priority is to finish the record and get it into somebody’s hands.
Jesse: Part of the issue is that there’s only so much you can do with two people. We have our hands full a lot of times with other aspects of our lives. Within the band itself, the record process is overwhelming. We’re doing it for 12 hours a day and sleep and do merch and all that. There’s a lot of stuff and it’d be nice to have people to help. The songs we have are great. I believe they will carry us to the position we want to be in. I have a lot of faith.

What’s the goal in terms of finishing this record?
Suzie: The goal is to be done by the end of the summer. It all depends on the final stages of production and recording with other players. That’s a question mark right now. We’re hoping to get that done. If that happens, we’ll be in a place for people to mix it and all that. We could be looking at a fall release. We’re definitely pushing for it. We want to have it out, but we don’t want to rush.

How many songs will be on the album?
Suzie: We tracked 13 songs. We might restrain ourselves this time and release a really strong record with less songs this time with 10 songs and hang on to the other ones.

The band does want to sign with a label for this release?
Jessie: That’s the goal: To find someone to work with us with similar vision.
Suzie: We’re looking for a partner, not just someone to release our records. We want to find the right people. We’re a band of two and we’ve managed to create music together for many years. We both envision ourselves doing that as long as we can. We’re looking for a longterm partnership and we’re hoping we can find someone like that. We want to grow and have our fans grow with us.