Behind the story: The Narrative shares the story of the song 'Reason to Leave' 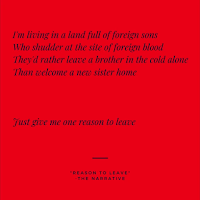 In 2010 my (Jesse) then-girlfriend-now-wife who is a natural born Mexican citizen was employed as a pastry chef at a hot new Manhattan based bakery. The bakery, which had said they’d try to acquire a work visa for her, ultimately could not, and so she applied on her own. She made the decision she would leave her position at the bakery while waiting for her status approval, and went to visit her family for a week in Mexico before returning back legally on a separate visa she had. On her way back, because she had applied for a work visa she was flagged at immigration. Had she not applied, she would have had no issues. After being asked if she was working in the US and honestly responding about her situation, she was issued a 5 year deportation.

There’s a lot more context here but I was struggling with a lot of anger, sadness, and frustration at the state of immigration in our country. One day I was listening to Icky Thump by @thewhitestripes and was inspired to write about it, and thus "Reason to Leave" was born. “Well, Americans: What, nothing better to do? Why don’t you kick yourself out? You’re an immigrant too. Who’s using who? What should we do? Well you can’t be a pimp and a prostitute too.”

For those immigrants who get sworn in today to US citizenship, they are forced to renounce any “allegiance and fidelity” to their homeland and “bear arms on behalf of the United States when required by the law”. Listen to the whole song on Golden Silence, our 2016 full length available on Spotify.